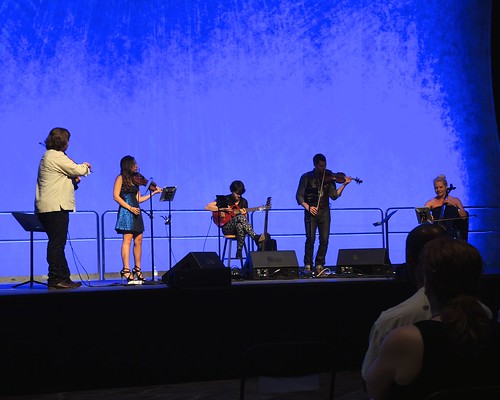 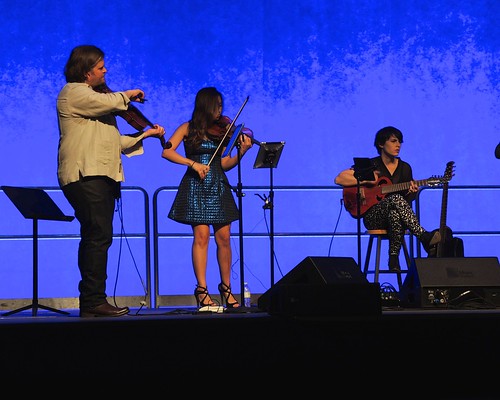 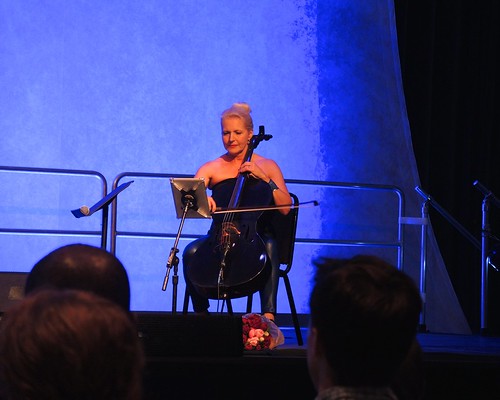 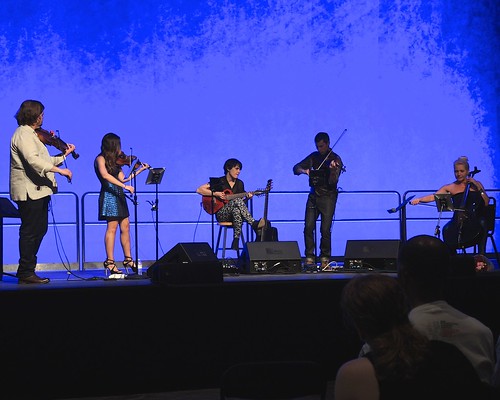 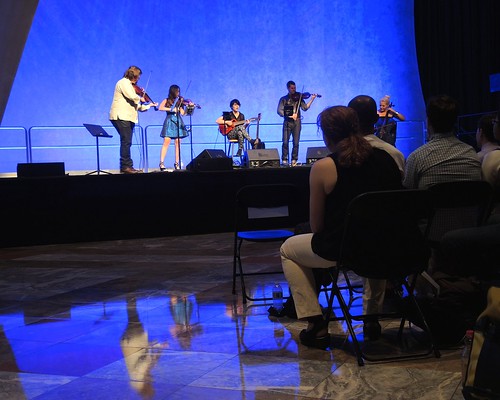 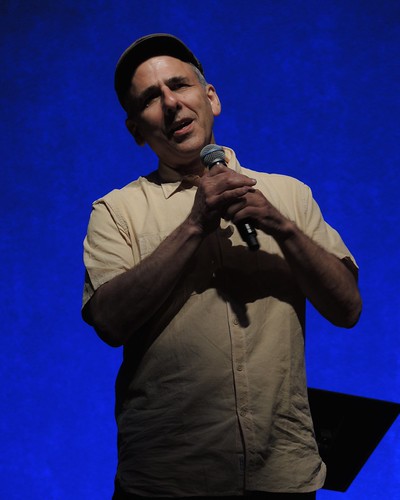 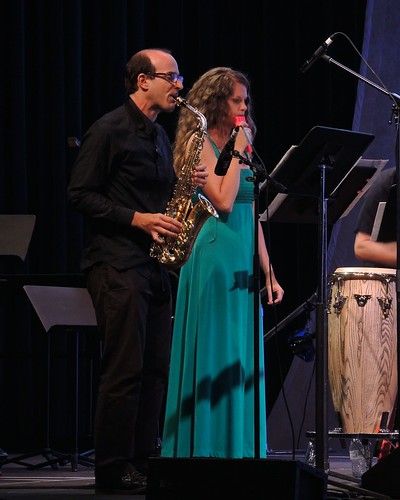 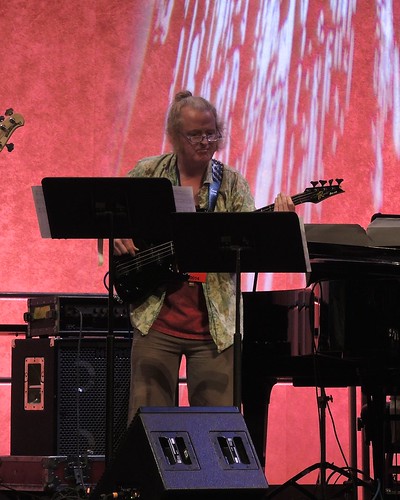 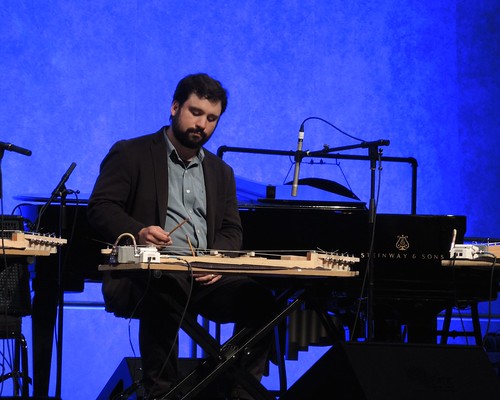 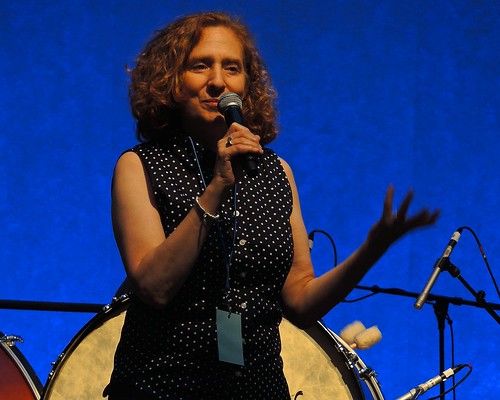 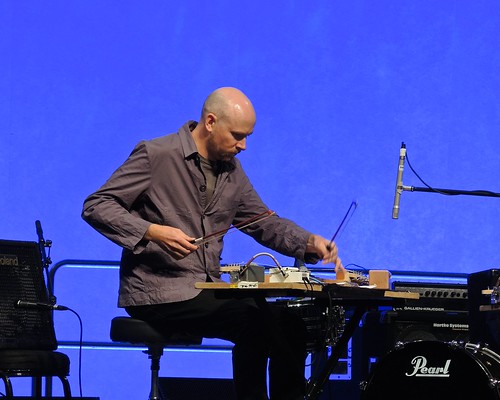 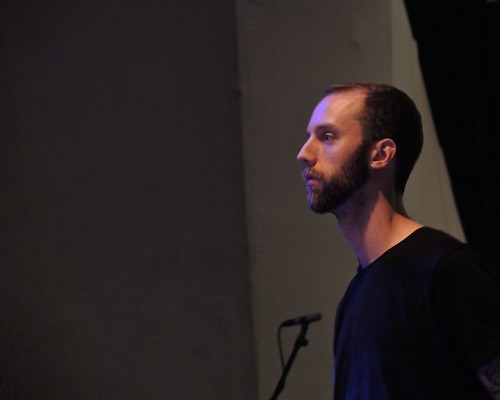 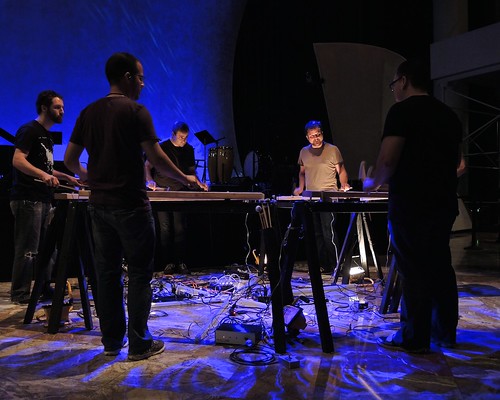 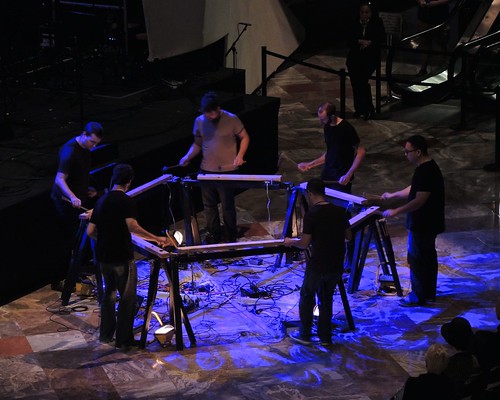 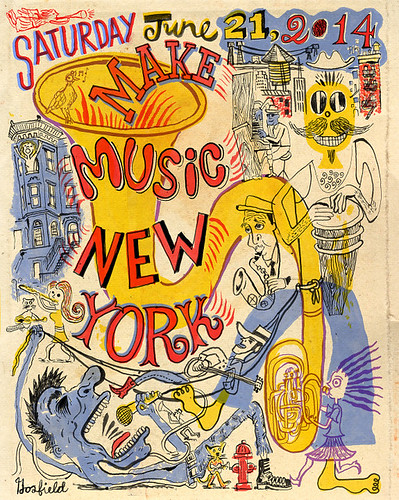 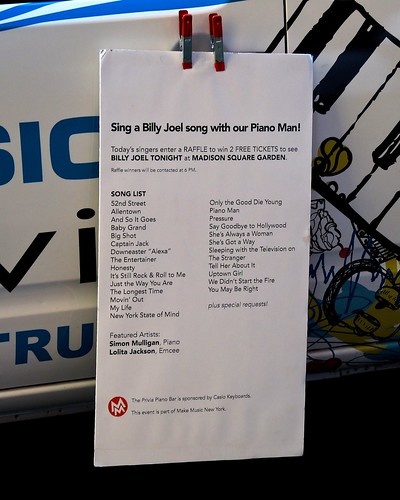 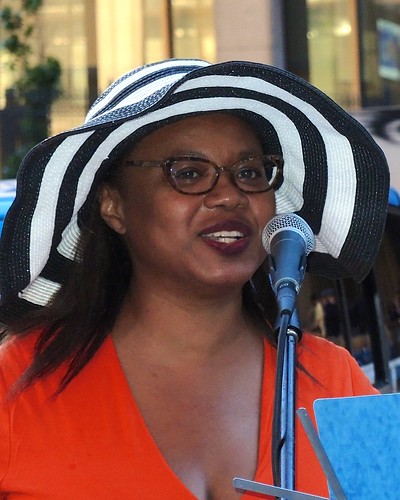 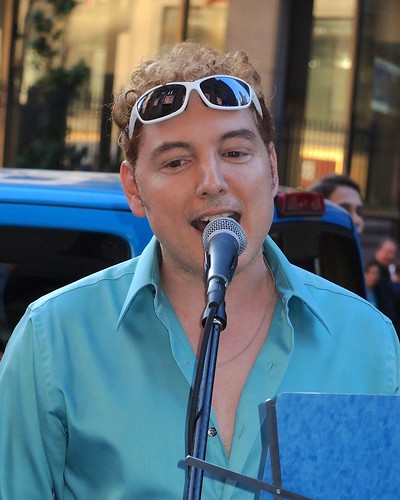 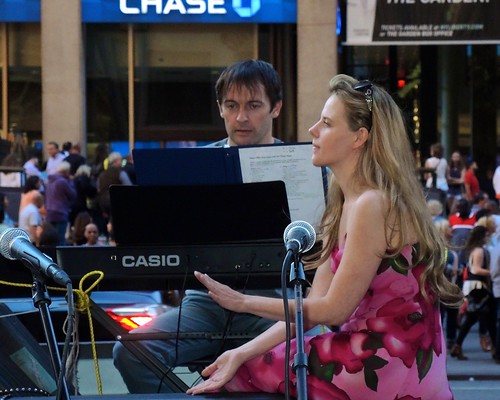 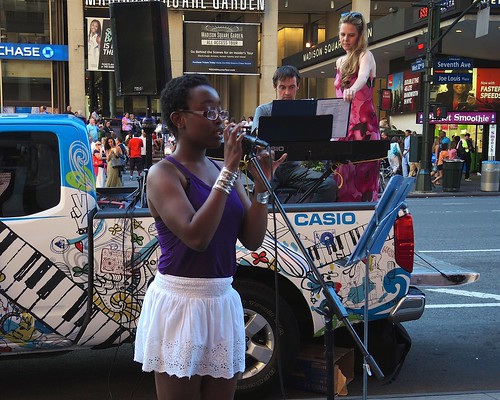 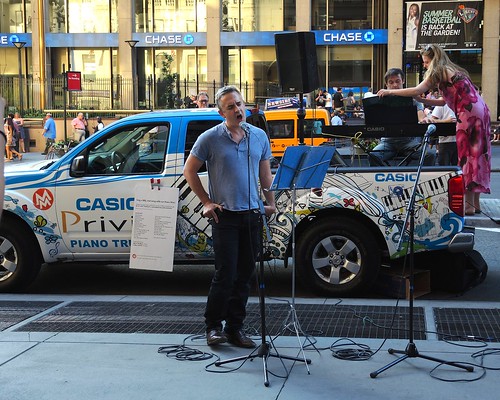 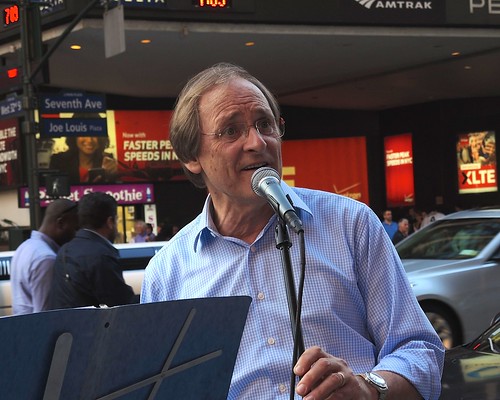 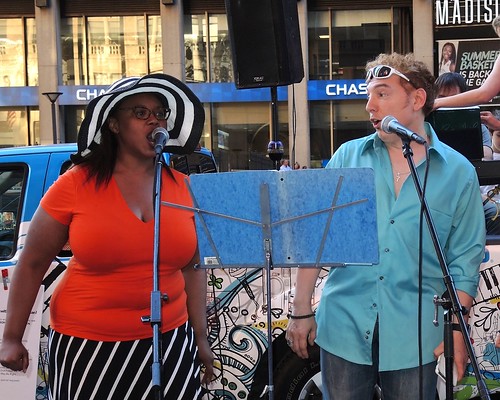 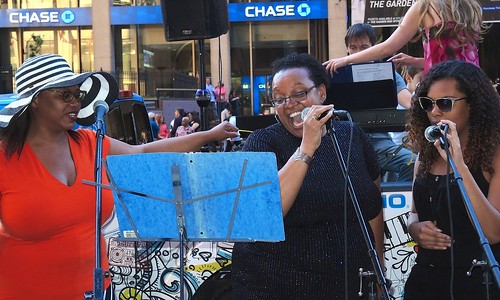 Two For the Price of None

One of the joys of living in Brooklyn is the overwhelming abundance of free entertainment. Especially during the summer, you’d have to lock yourself inside to completely avoid being exposed to the thousands of concerts, performances, festivals and extravaganzas — even spontaneous bursts of singing and drumming — that are available without charge around the borough.

It is impossible for even the most dedicated music lover to attend every show that takes place during a Brooklyn summer, but sometimes luck and circumstance allow those in the borough of Kings to something akin to a mini-music festival.

Today at lunchtime, a hip-hop flavored reggae band, Vybz Evolution, was performing on a stage erected in front of Borough Hall. The blazing sunlight seemed to fuel their high energy act as they sang, danced and engaged the enthusiastic audience.

Only a block away, in the cool, deep shadows cast by nearby buildings, Ginetta’s Vendetta brought the sound of funk-influenced jazz to a tiny plaza at the corner of Adams and Willoughby Streets. Listeners were spellbound as the band’s leader, Ginetta Minichiello, sensuously swayed in the street while playing her silver plated pocket trumpet.

Two great noontime concerts, only steps from each other, and both for the same great price: free!

The stage in front of Borough Hall

Ginetta’s Vendetta on the street

Ginetta and her trumpet

Keeping the beat in the shade

It was created by College Media Journal (CMJ), the magazine that published the first record charts based on college radio airplay. Back when it started in 1980, the CMJ Music Marathon (the Film Festival was added in 1994) provided college radio staffs the opportunity to meet and hear music from new and emerging sources.

Over the years the CMJ Music Marathon and Film Festival has grown and changed, but its primary focus has remained on music that appeals to college audiences.

This year’s Festival featured thousands of musicians at dozens of venues around the city and drew an estimated 120,000 fans, artists, filmmakers, and industry pros. To my surprise, someone gave me a pass to the event. Although I expected a “college music” festival to consist of endless loud party tunes for drunken frat boys (think MTV Spring Break), I was wrong.

In fact, I saw more acts than I could count (including old favorites and new discoveries), performing in a wide variety of genres. The panels, which I anticipated as dull, dry discussions of industry statistics and forecasts, turned out to be entertaining and enlightening. Not to mention the film. Or the parties.

I did remember to take my camera to a few of the events. And if anyone wants to give me a badge to new year’s Festival … I’d be more than happy to accept.

The Dizzy Gillespie All Stars

Why is a full sized windmill turning right in the middle of Broadway?

It is part of the celebration of the Dutch arriving in New York 400 years ago, New Amsterdam Village was temporarily constructed, just below Bowling Green Park, at Broadway and Beaver Streets. The village contains booths designed to resemble traditional Dutch canal houses. Some sell traditional foods and products, including cheese, herring, stroopwafels (sweet waffle cookies), flowers and wooden shoes – and yes, even a windmill.

In an open area, intended to represent the village square, a variety of musical acts performed for passersby. The highlights were the raucous numbers from Dynamo, a colorfully costumed youth marching / dancing / percussion / kazoo group, the unexpectedly diverse and humorous repertoire of Kleintje Pils, a brass band clad in traditional striped smocks and wooden shoes and Jan David performing “Miss Sunshine,” the song he composed in honor of NY400.

The windmill dwarfed by skyscrapers

Trying to play the kazoo while giggling

Arlo Sings in the Castle

One of America’s best-loved folk musicians, Brooklyn-born Arlo Guthrie is the son of legendary songwriter Woody Guthrie. Tonight he performed at Castle Clinton in Lower Manhattan, part of the tribute to the 40th anniversary to the Woodstock Festival.

Arlo’s humorous and heartfelt singing delighted the overflow crowd which he regaled with tales and tunes about the 50 or so years he has spent onstage. His stories, which punctuated the evening, touched on everything from his boyhood in Coney Island to appearing onstage at Woodstock to a brief gig acting on a television series called The Byrds of Paradise to his upcoming 40th wedding anniversary.

He played guitar, piano and harmonica and performed his own songs as well as those written by people he has known and loved: Pete Seeger, Leadbelly, Ramblin’ Jack Elliot, and of course, his father. The highlight of the evening was the last scheduled number, when the assembled audience joined him in signing what is arguably Woody Guthrie’s best-known song, This Land is Your Land.

He played harmonica, guitar and piano

The capacity crowd was standing-room-only

After the sun set, the audience sang along