Seeing the Pope in the Park

Pope Francis arrived late on the afternoon of the 24th and was immediately whisked to St. Patrick’s Cathedral where he led the evening prayer. The next morning he plunged into a whirlwind of activities around Manhattan, going to the East Side to address the United Nations General Assembly, heading downtown to hold a multi-religious service at 9/11 the Memorial and Museum, driving uptown for a visit with students at Lady Queen of Angels School in East Harlem, traveling in a motorcade through Central Park and then down to a Mass at Madison Square Garden.

Admission to all of the events involving the pope was restricted; at no point could someone simply wander over to a school or church to catch a glimpse of the pontiff. Tickets to the religious services were distributed by politicians and priests, while city officials conducted a free lottery for those wishing to view the pope’s procession through Central Park.

On September 10, 40,000 area residents were notified by phone and email that they’d each won a pair of tickets to see the motorcade. The announcements were accompanied by detailed instructions, warnings and restrictions, including a lengthy list of prohibited items:

Those selected in the giveaway were assigned to color-coded park entrances (red, yellow, green) and told to arrive, bearing their tickets, before 3:00 p.m. to ensure that they’d pass through security in time to see the pontiff drive by at 5:30.

The southern end of the Park was enclosed behind high fences while security gates and tents were erected near Columbus Circle. The streets surrounding Central Park were closed to traffic. Thousands of law enforcement officers, both uniformed and in plain clothes, were deployed throughout the area. Although the gates weren’t scheduled to open until 11:00, anxious ticket holders began arriving at the barricades before dawn and patiently waited for hours until they were able to move forward.

The crowd slowly passed through airport-style security checks conducted by Transportation Security Administration agents including X-rays, inspection of electronic devices and sniffs from dogs trained to detect explosives.  Upon entering the Park, the faithful sprinted towards the metal barriers lining the roadways.

People jockeyed for position, trying to get as close to the front as possible, then settled in for the day. At one point, someone in the crowd cried, “Look up!” All heads turned to see that, directly above the path that the pope would take, a tiny rainbow had appeared above.

As observers remarked on the fact that the day had been clear and almost cloudless (“Imagine, a rainbow without rain!”), the colored strip grew wider, longer and bent into an upside down arc. “It looks like a smile,” some said. Others thought that it was a sacred sign, a blessing, a miracle. After a few minutes, the rainbow faded away.

Finally, a rumble was heard in the distance and a fleet of slowly moving vehicles, all of them flashing lights, appeared. A convoy of motorcycles, armored trucks, NYPD vans, limousines rolled past as excitement in the crowd surged. An open bed truck, its rear filled with photographers and camera operators clamoring for shots, was directly in front of the sight all were awaiting: the famed white Popemobile.

Inside stood the pontiff, smiling and waving his hand to the faithful. The vehicle drove slowly through the Park without pausing. Pope Francis and his guards moved up the roadway and drove out of sight, headed south to Madison Square Garden, where he celebrated Mass and delivered a homily that included references to urban life.

Living in a big city is not always easy. A multicultural context presents many complex challenges. Yet big cities are a reminder of the hidden riches present in our world: in the diversity of its cultures, traditions and historical experiences. In the variety of its languages, costumes and cuisine. Big cities bring together all the different ways which we human beings have discovered to express the meaning of life, wherever we may be.

But big cities also conceal the faces of all those people who don’t appear to belong, or are second-class citizens. In big cities, beneath the roar of traffic, beneath “the rapid pace of change”, so many faces pass by unnoticed because they have no “right” to be there, no right to be part of the city. They are the foreigners, the children who go without schooling, those deprived of medical insurance, the homeless, the forgotten elderly.

These people stand at the edges of our great avenues, in our streets, in deafening anonymity. They become part of an urban landscape which is more and more taken for granted, in our eyes, and especially in our hearts. 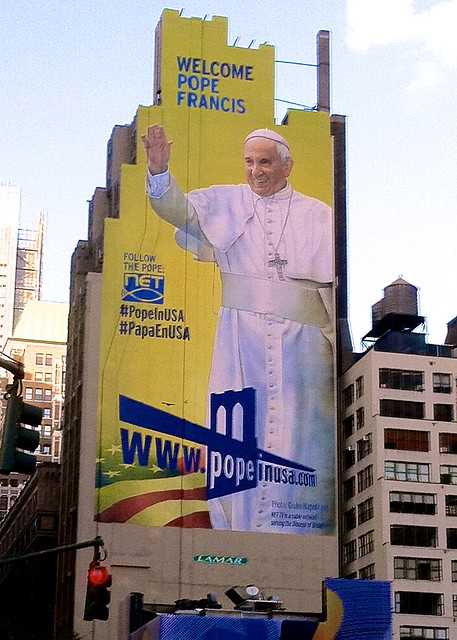 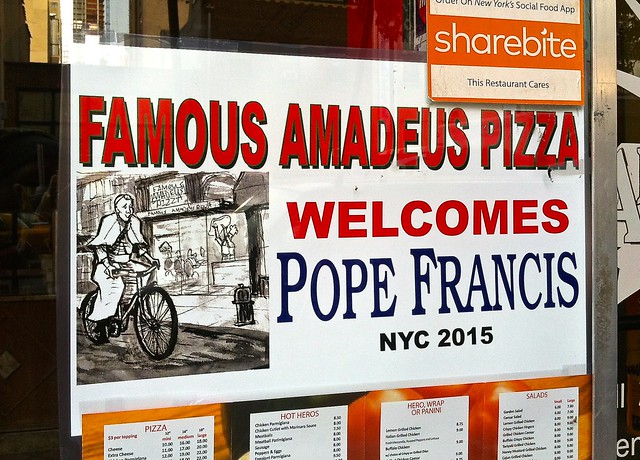 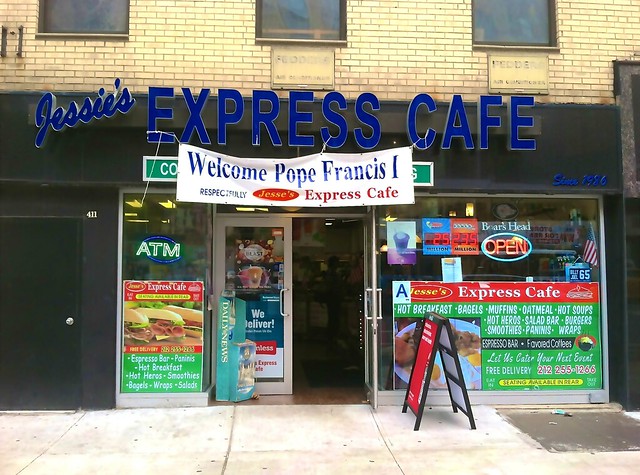 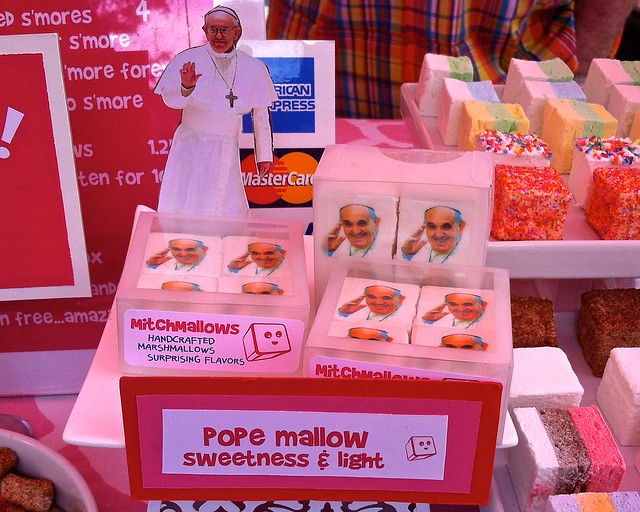 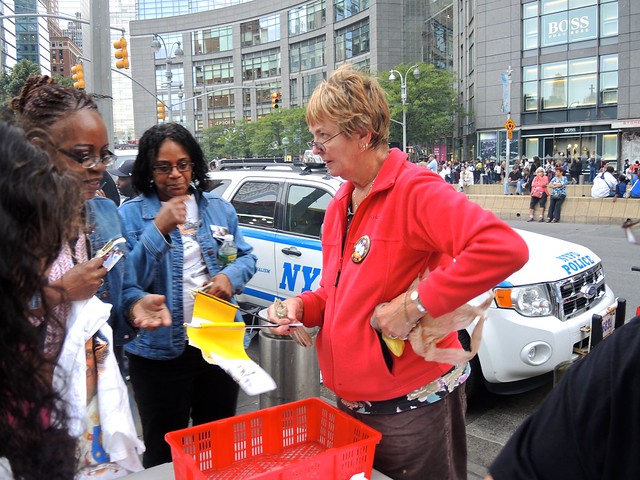 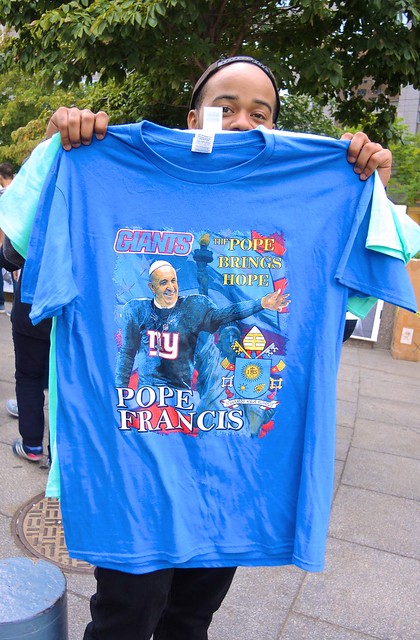 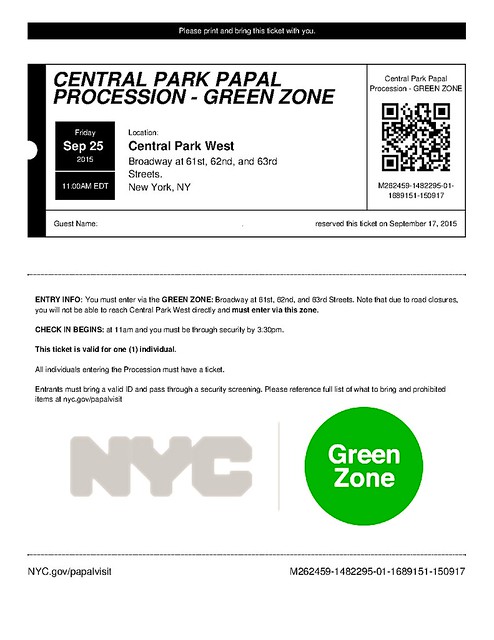 Ticket to the green zone 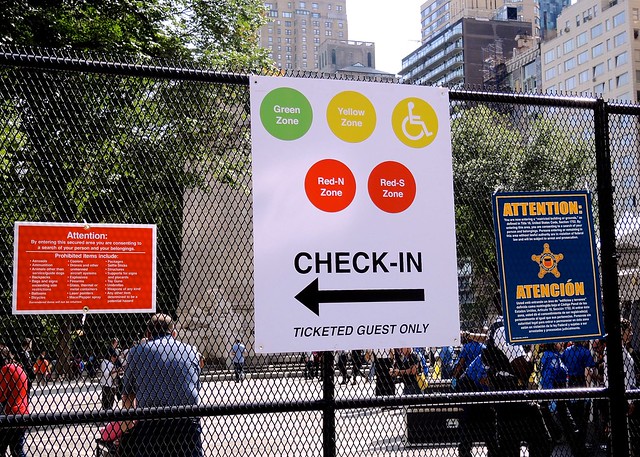 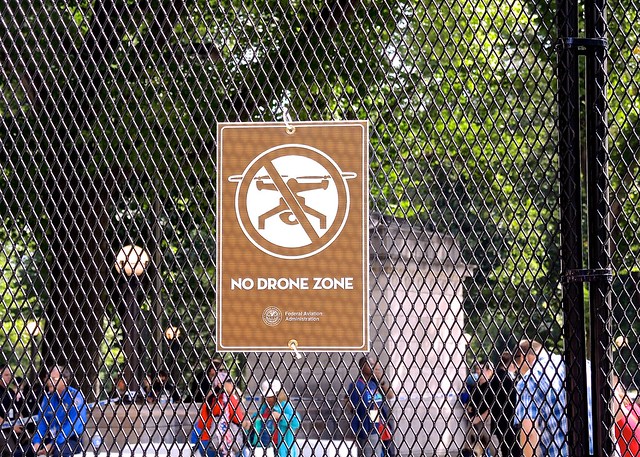 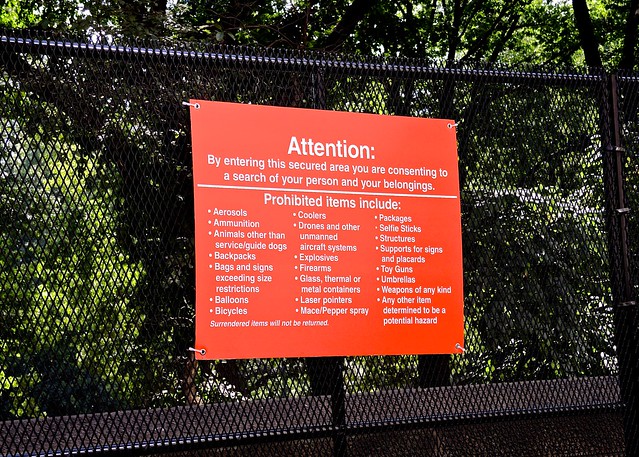 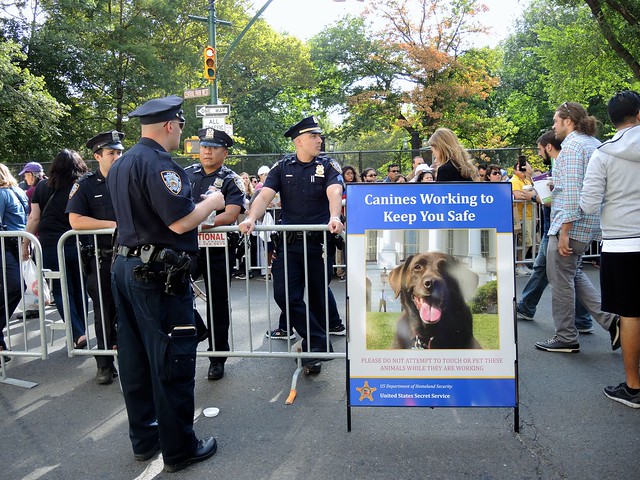 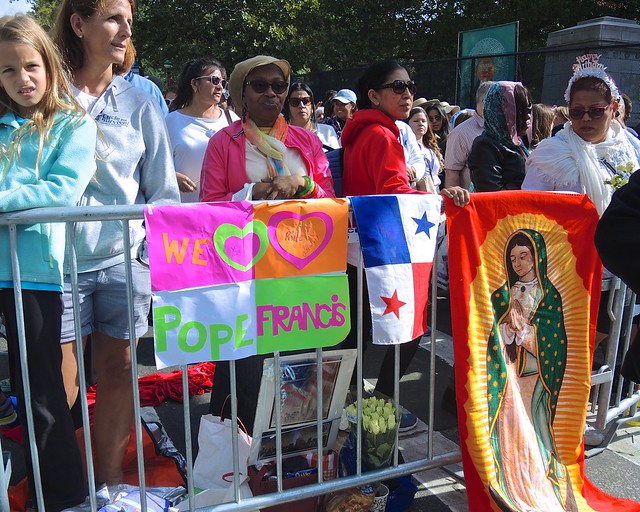 First arrivals at the barriers 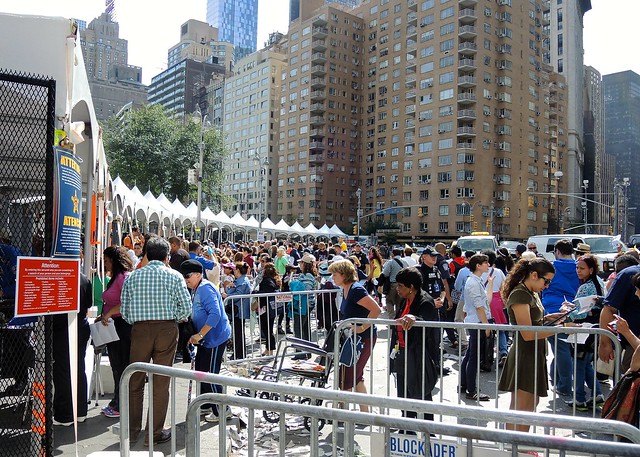 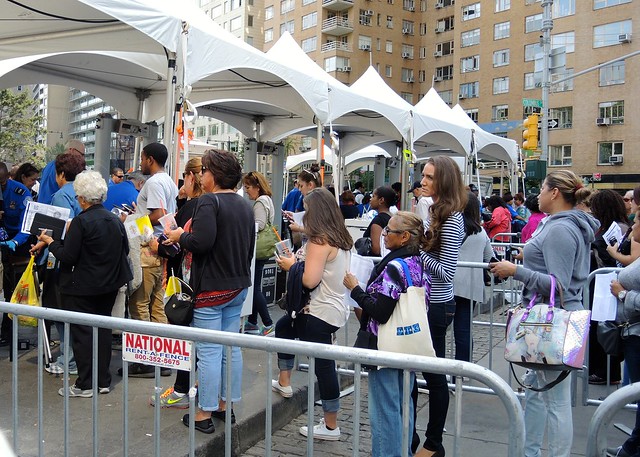 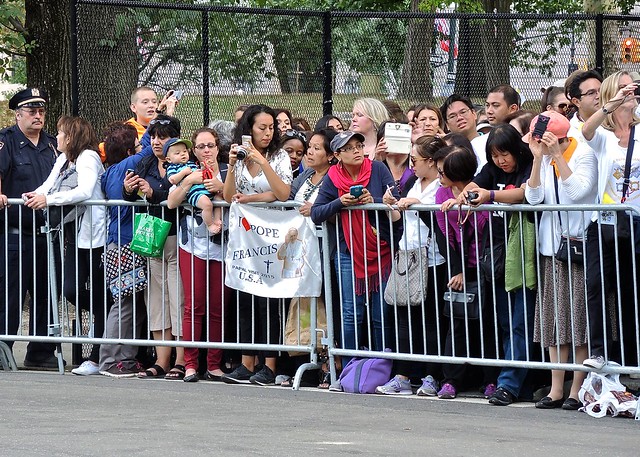 Standing against the barricades 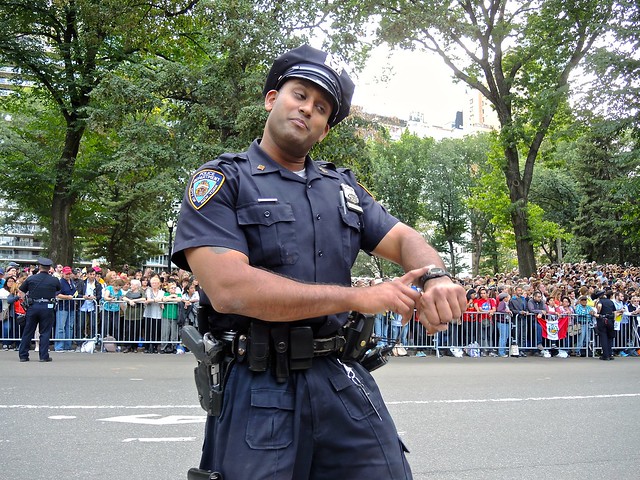 Officer reminding the crowd to be patient 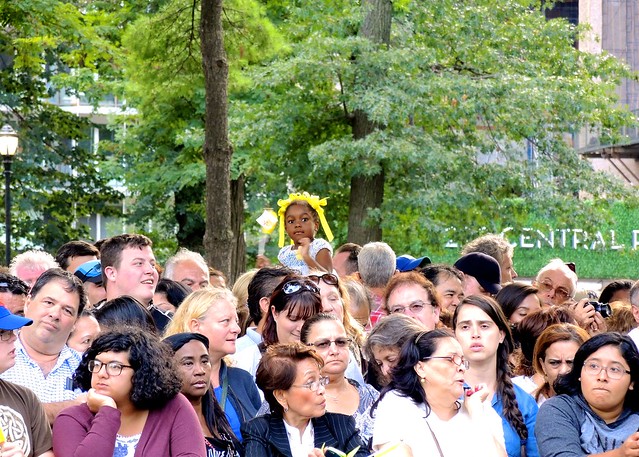 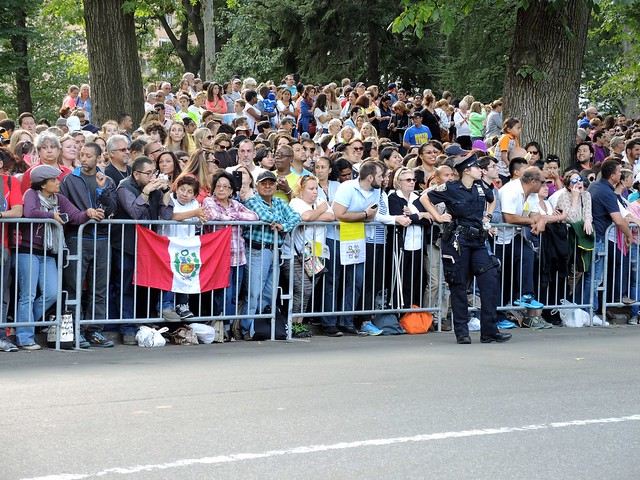 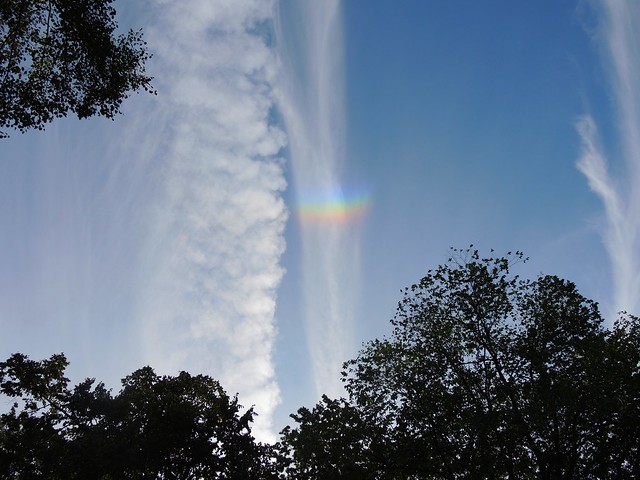 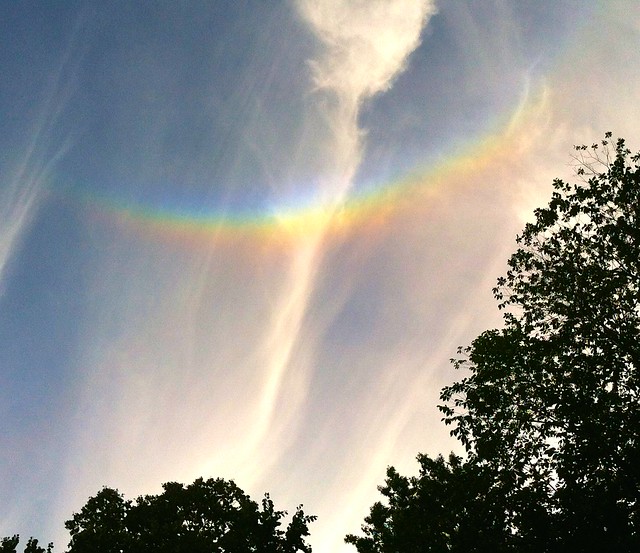 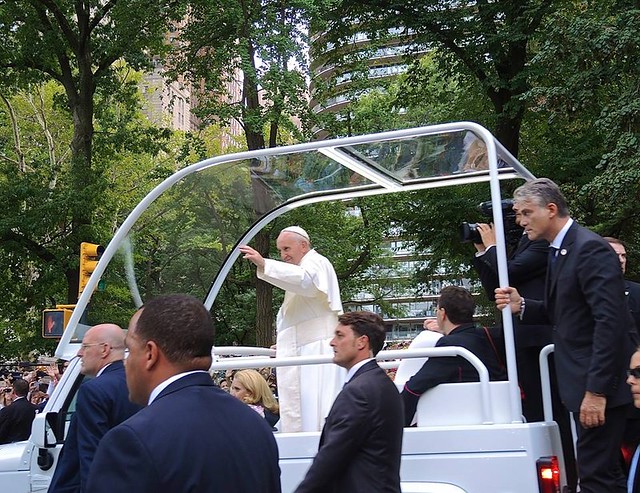 He arrived, waved, and drove on